TALtech is proud to announce the long awaited release of a 32 bit version of their Standard WinWedge® serial data acquisition program. To ship June 2001. 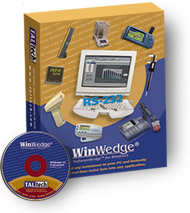 WinWedge is an easy to use data collection program designed for interfacing RS232 devices such as bar code scanners, scales, calipers, micrometers, laboratory instruments and other serial output devices, to any Windows application. Input real-time serial data directly into Excel, Access, LIMS, MMIs, statistical software or any other Windows software.

The first version of WinWedge was released in 1991 and this is the first major upgrade to WinWedge standard in 5 years.

Complete context sensitive help (available by pressing function key F1) has also been added to all windows and dialog boxes thus making WinWedge easier to set up and use. A new “Virtual Instrument” mode even allows you to test the functionality of WinWedge without requiring an actual serial instrument to be attached to your PC. The user’s manual has also been re-written to include many new examples for setting up and using WinWedge with different serial devices and other software products (i.e. new versions of Excel). All new features were designed to support a wider range of RS232 instruments and I/O data formats as well as make WinWedge much easier to set up and use.

The new version of WinWedge is a true 32 bit application program that takes advantage of the new Windows user interface in a number of ways. The new version fully supports long file names and it also inserts it's icon into the Windows system tray instead of the Windows taskbar. Because it is a true 32 bit Windows program, it is also much faster than previous 16 bit versions of WinWedge runnung in a 32 bit Windows environment.

Since 1988 TALtech has focused on providing the highest quality software and support for inputting data from RS232 (serial) devices into any PC application software. WinWedge, SoftwareWedgeTM for Windows, is now available for all versions of Windows including 2000, XP, NT and CE.

As with all TALtech software, WinWedge comes with free, and unlimited technical support. List price for WinWedge Standard is $259 and the upgrade price is $129 (from WinWedge v1.2). Upgrades are available directly from TALtech.

"If you can't figure it out, TALtech will help you... and they don't charge! I've been pleased as punch!"